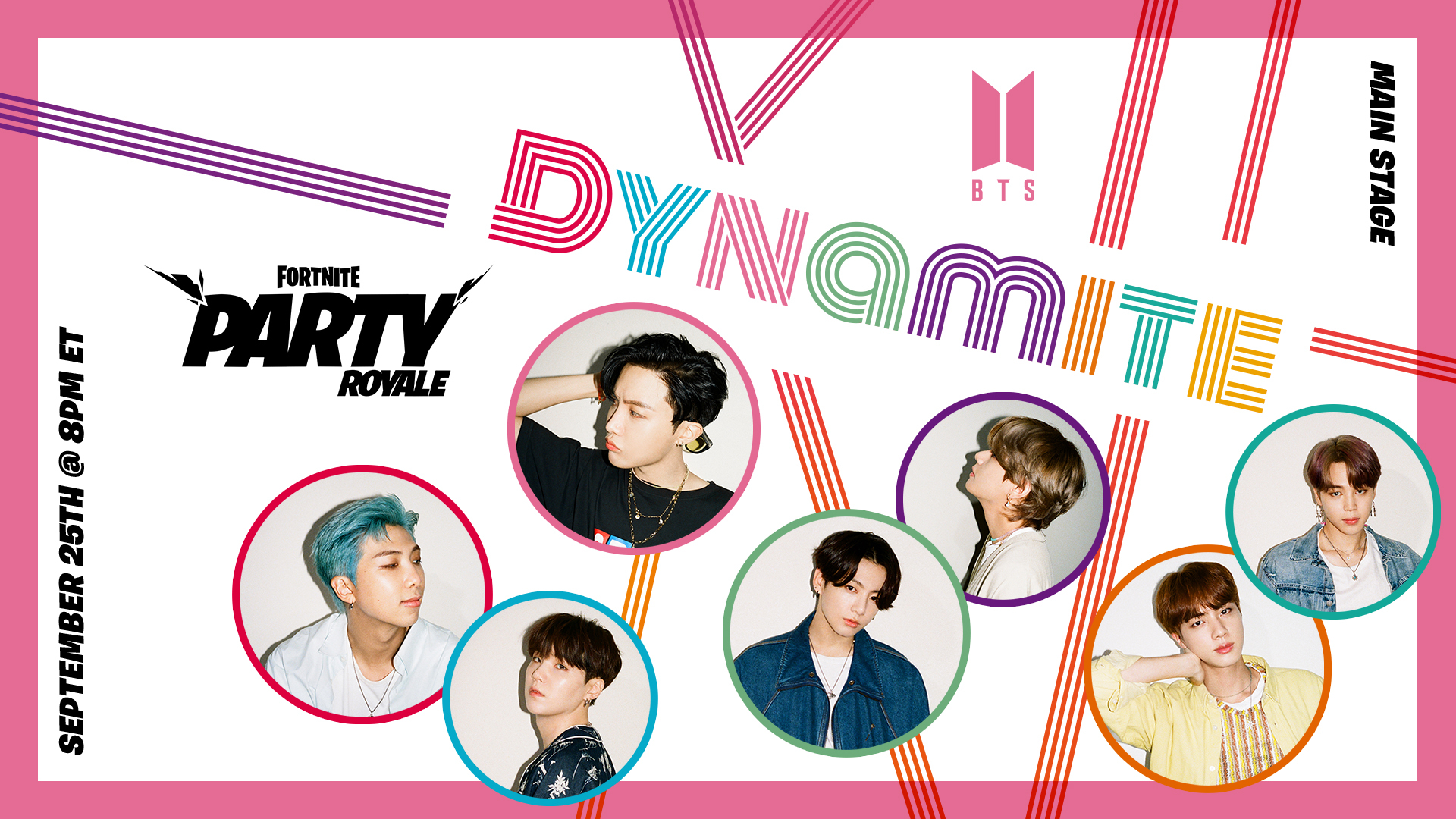 “Dynamite” is BTS’ latest English-sung single. The song debuted at No.1 on Billboard Hot 100 and maintained that feat for two consecutive weeks, first ever for a Korean pop act. The official music video also became YouTube’s most viewed music video in its first 24 hours with 101.1 million views.

The video — a never-before-seen choreography version of BTS’ “Dynamite” — will premiere on Friday, September 25 at 8:00 PM EDT. The premiere will take place in Fortnite’s Party Royale mode, the game’s no-combat social space where players can get together with friends to catch concerts, watch movies, or just chill. Following the premiere, players can enjoy “Dynamite (Tropical Remix)” afterparty with karaoke graphics to sing and dance along.

Additionally, starting September 23 at 8:00 PM EDT, players can purchase a bundle with two emotes choreographed after BTS. These new moves will let players bring some BTS style to the premiere or anywhere in Fortnite! The “BTS Dynamite Bundle” will cost 800 V-bucks.

“We’re always looking to partner with talented artists who are interested in pushing boundaries and finding innovative ways to reach fans,” said Nate Nanzer, Head of Global Partnerships at Epic Games. “BTS is not only incredibly popular worldwide, but their talent, creativity, and forward-thinking attitude made them a perfect match. We’re honored to host their premiere.”

Fortnite is available as a free download on PlayStation 4, Xbox One, Switch, PC, and Android via www.fortnite.com.

Founded in 1991, Epic Games is an American company founded by CEO Tim Sweeney. The company is headquartered in Cary, North Carolina and has more than 40 offices worldwide. Today Epic is a leading interactive entertainment company and provider of 3D engine technology. Epic operates Fortnite, one of the world’s largest games with over 350 million accounts and 2.5 billion friend connections. Epic also develops Unreal Engine, which powers the world’s leading games and is also adopted across industries such as film and television, architecture, automotive, manufacturing, and simulation. Through Unreal Engine, Epic Games Store, and Epic Online Services, Epic provides an end-to-end digital ecosystem for developers and creators to build, distribute, and operate games and other content.

BTS, an acronym of Bangtan Sonyeondan or “Beyond the Scene,” is a South Korean boyband that has been capturing the hearts of millions of fans globally since their debut in June 2013. The members of BTS are RM, Jin, SUGA, j-hope, Jimin, V, and Jung Kook. Gaining recognition for their authentic and self-produced music, top-notch performances, and the way they interact with their fans, the band has established themselves as global superstars breaking countless world records. While imparting a positive influence through activities such as the LOVE MYSELF campaign and the UN ‘Speak Yourself’ speech, BTS has mobilized millions of fans across the world (named ARMY), topped prominent music charts, performed multiple sold-out stadium shows across the world and has been named as one of TIME 100: The Most Influential People of 2019. The band has also been recognized with numerous prestigious awards like the Billboard Music Awards, American Music Awards and MTV Video Music Awards.

Esports Market- Roadmap for Recovery From COVID-19 | Branding Through Esports...

BusinessWire - 26 Ottobre 2020
LONDON--(BUSINESS WIRE)--#EsportsMarket--Technavio has been monitoring the esports market and it is poised to grow by USD 1.40 billion during 2020-2024, decelerating at a CAGR...

Over the Moon – Recensione

Reservations Begin for Pokémon Rooms on December 18 at APARTMENT HOTEL...