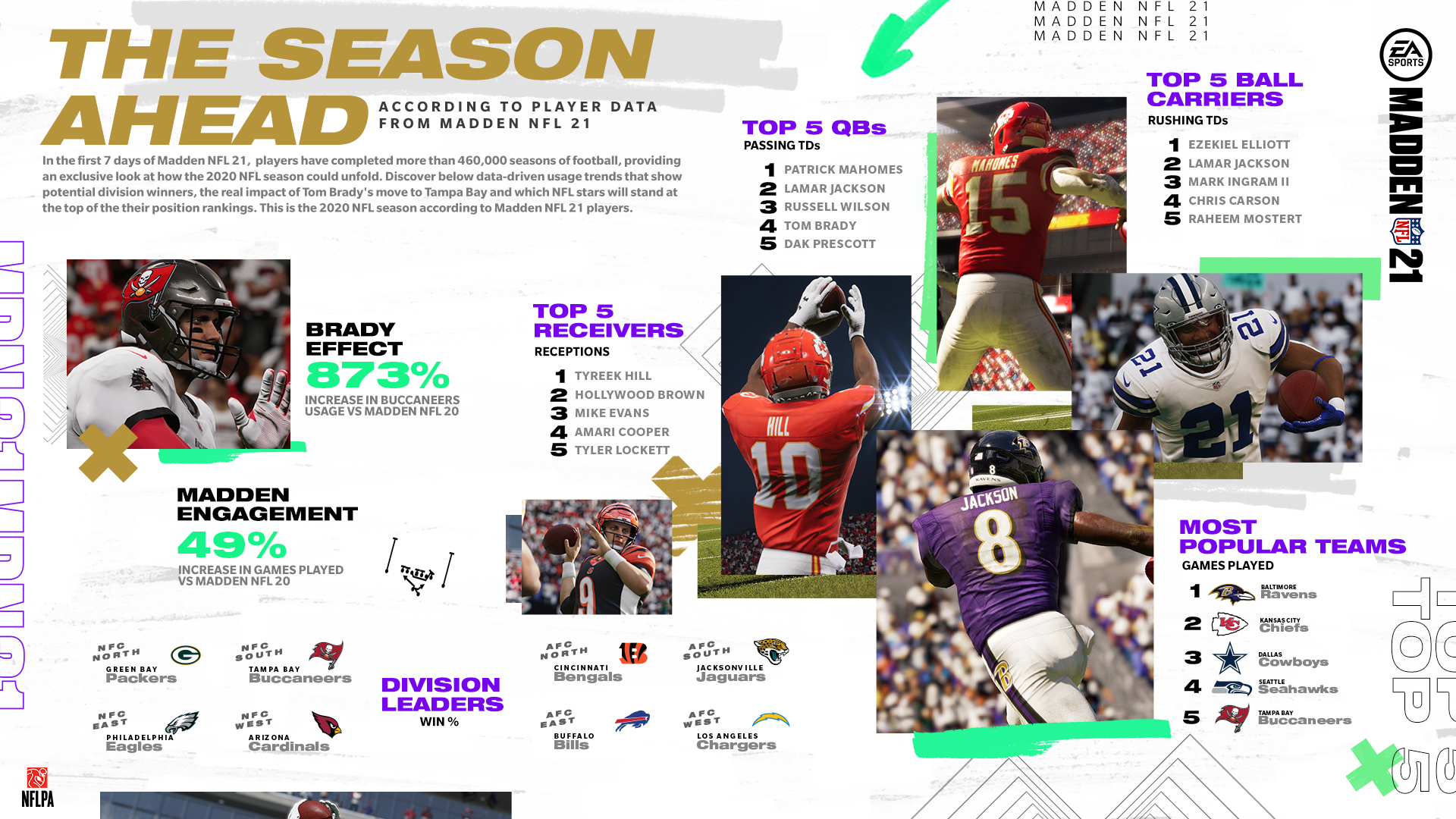 Madden NFL 21 is Also Being Played More in its First Week, Highlighted by More Than 17 Million Games Played in the New Mode, The Yard

With More People Playing, the Fans Have Made Their Choice as Tom Brady and the Tampa Bay Buccaneers Have Seen an 873 Percent Increase in Games Played

REDWOOD CITY, Calif.–(BUSINESS WIRE)–As millions of fans across the globe are gearing up for the return of the NFL next week, EA SPORTS Madden NFL 21 is where football fans have come to play and express their excitement for the season’s start. Madden NFL 20 was a record-setting year that saw more unique players and engagement than ever before in Madden NFL franchise history. Now, Madden NFL 21 continues that momentum with sell-through up nearly 20 percent year-over-year in its first week.

Since the game’s launch on August 28 for Xbox® One, PlayStation®4 and PC, players have played nearly 50 percent more games in Madden NFL 21 compared to the first week of Madden NFL 20. Additionally, The Yard, the brand-new backyard football inspired mode in Madden NFL 21, has been a hit with players, with more than 17 million games played already. The Yard brings fast-paced, small-sided gameplay to the Madden NFL franchise and offers new ways for players to express themselves through deep customization options and relaxed rules that allow for creative gameplay moments and trick plays such as behind the back throws and double passes.

“After the most successful year in franchise history, fans are now playing more Madden than ever before. In the last weeks, players have shown their passion for Madden with a lot of great feedback and stellar engagement in Madden NFL 21,” said Seann Graddy, Executive Producer, EA SPORTS Madden NFL. “We truly appreciate the fans who have been playing Madden NFL 21 and we are excited to bring new improvements, content and experiences with our live service updates throughout the year.”

In the first seven days of Madden NFL 21, players have completed more than 460,000 seasons of football, providing an exclusive look at how the 2020 NFL season could unfold. Players have spoken, and this year the two most popular teams are the Baltimore Ravens, led by Madden NFL 21 Cover Athlete and NFL MVP Lamar Jackson, followed by the Kansas City Chiefs, led by Madden NFL 20 cover athlete and reigning Super Bowl MVP Patrick Mahomes. Jackson is one of the top ball carriers across the game, with the second most rushing touchdowns of all players, and the highest rushing yards among quarterbacks and the second most passing touchdowns.

For his part, Mahomes is the top quarterback with the most passing touchdowns and passing yards per game. Not to be overlooked, is the impact of six-time Super Bowl Champion and newly minted Tampa Bay Buccaneers quarterback Tom Brady who helped raise usage of the Buccaneers by more than 850 percent compared to last year and put the team on top of the NFC South.

Check out the full breakdown for projected division winners, top performers and more in the attached infographic that gives a look at the season ahead.

To stay updated on all things Madden NFL 21, tune in every morning, Monday through Friday, to Good Morning Madden on Twitch for the latest discussions on community feedback and insights into the development process.

Madden NFL 21 is developed in Orlando, Florida by EA Tiburon, and is available now for Sony PlayStation®4, Microsoft Xbox® One and PC via Origin™ and Steam. Madden NFL will land on Stadia – Google’s cloud-based gaming platform – this winter. EA SPORTS will also deliver distinct Madden NFL 21 experiences across current and next generation platforms. EA SPORTS is offering Dual Entitlement, creating ways for players who purchase either an Xbox Series X or PlayStation 5 to upgrade* their copy of Madden NFL 21 from prior generation Xbox One or PlayStation 4 platforms at no additional cost. Discless consoles require a digital entitlement to upgrade. Visit ea.com/dual-entitlement for more information.

EA SPORTS, Battlefield, Apex Legends, The Sims, Need for Speed, Titanfall and Plants vs. Zombies are trademarks of Electronic Arts Inc. Madden and the NFL are property of their respective owners and used with permission.