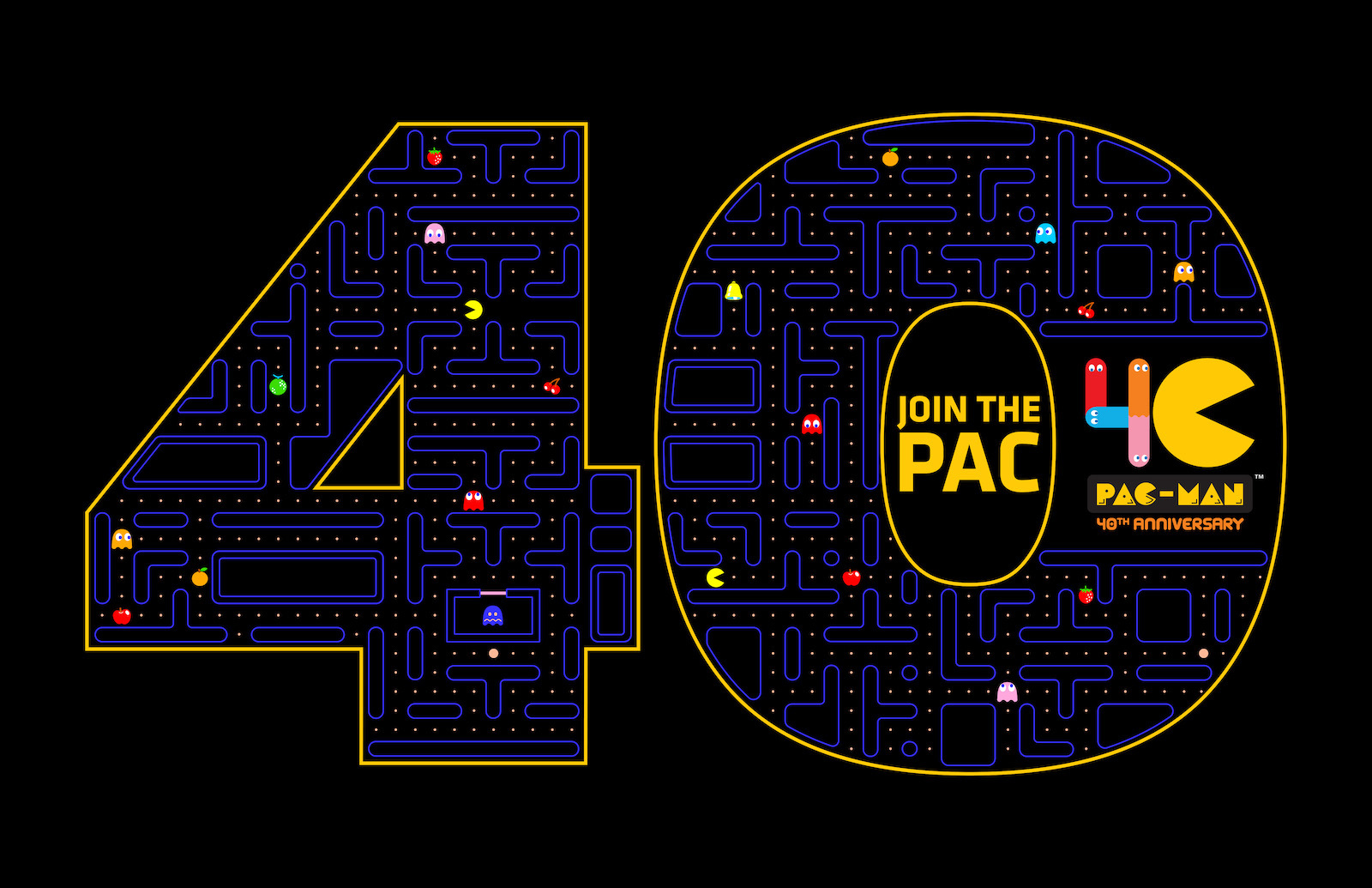 Ramping Up Celebrations Starting Today, the Famous 80’s Icon Celebrates 40 Years of Entertaining Millions of Fans Around the World

SANTA CLARA, Calif.–(BUSINESS WIRE)–Leading interactive entertainment company BANDAI NAMCO Entertainment Inc. today celebrates PAC-MAN’s 40th birthday with upcoming activities and partnerships to commemorate this momentous milestone with fans around the world. The video game and pop culture icon steps into his 40s more relevant than ever as he stars in a bevy of new video game offerings, product partnerships, and brand collaborations.

Born on May 22, 1980, PAC-MAN immediately rose to meteoric popularity, first in video game arcades, then on the pop culture stage with hit song “PAC-MAN Fever” and through an array of branding and entertainment appearances throughout the 1980’s and 1990’s. With a brand recognition rate of 90% around the world, PAC-MAN’s image and brand continues to be one of the most recognized on the planet.

While PAC-MAN has transcended into the world of entertainment, his heart still resides in video games. As part of his 40th birthday celebrations, PAC-MAN will be making a special appearance in a Minecraft® DLC enabling players to enjoy PAC-MAN mazes within the game starting today. In addition to Minecraft, no 40th anniversary celebration would be complete without new PAC-MAN video game offerings from BANDAI NAMCO Entertainment starting with PAC-MAN LIVE STUDIO coming to the Twitch game platform, in partnership with Amazon Games, which will enable four players to compete in one maze in an all-out chomp-fest to see who will eat the most pellets and survive the stage. Players will also be able to create their own PAC-MAN mazes and share them with friends online or play the classic PAC-MAN game if they so choose. For classic arcade experience connoisseurs, a special Tastemakers 40th Anniversary Arcade 1UP machine is available now at Arcade1Up.com for $399, with 40th Anniversary Counter-cade, Party Cade, and Head-to-Head models coming this summer. Lastly, additional new PAC-MAN games are on the way for the latter part of 2020.

On the product partnership, brand collaboration, and technology fronts, PAC-MAN is not slowing down one bit as he started the year by being featured on BANDAI America’s newest Tamagotchi toy. PAC-MAN also returns in PAC-MAN and the Ghostly Snack Attack, the next chapter of his PAC-MAN™ Stories™ series on Amazon’s Alexa platform – available this summer. Never one to shy away from the camera, PAC-MAN will share his personal story in a 40th Anniversary Book, edited by Cook & Becker, which will take a retrospective look at his creation and life leading up to his 40th birthday. PAC-MAN is also the subject of advanced AI research being conducted by NVIDIA. Trained on 50,000 episodes of the game, a powerful new AI model created by NVIDIA Research , called GameGAN, can generate a fully functional version of PAC-MAN — without an underlying game engine. This means that even without understanding a game’s fundamental rules, AI can recreate the game with convincing results.

Music has always been a part of the PAC-MAN brand and after composing the new PAC-MAN 40th Anniversary theme song “JOIN THE PAC”, world-renowned Japanese Techno artist Ken Ishii is back with new tracks in PAC-MAN 40th ANNIVERSARY COLLABORATION vol.1, PAC-MAN 40th ANNIVERSARY COLLABORATION vol.2, and PAC-MAN 40th ANNIVERSARY COLLABORATION vol.3. The PAC-MAN beats will start flowing via Spotify, Apple Music, Amazon Music, Qobuz, and Deezer with new tracks being launched every month between May 22, 2020 through July 24, 2020. Once all the tracks are released, a special CD compilation will be issued with album art designed by The Designers RepublicTM known for their designs for Warp Records and Aphex Twin. Fans looking to access game soundtracks will be pleased to learn that the soundtracks from PAC-MAN & GALAGA DIMENSIONS, PAC-MANIA, and PAC-MAN Championship Edition DX will also be available on the music streaming services listed above starting today.

The subject of health and staying fit is more relevant to the PAC-MAN brand today than ever before. As PAC-MAN enters his 40’s, he’s become more aware of living a healthy lifestyle and hopes to inspire his fans to do the same by partnering with Giants Enterprises, the development and entrepreneurial arm of the San Francisco Giants Major League Baseball franchise, on multiple races including a special Virtual Challenge. Fans around the world can register online now for the Virtual Challenge and run or walk a total of 40 miles between now and September to receive a limited-edition PAC-MAN 40th Anniversary Race Kit, featuring a commemorative medal, race bib, and finisher’s sticker to showcase their accomplishment. Lastly, acting as BANDAI NAMCO’s goodwill ambassador, PAC-MAN recently participated in Google’s Stay Home and Play initiative through the inclusion of PAC-MAN’s highly popular 30th Anniversary Google Doodle that featured a fully playable PAC-MAN maze integrated within the Google logo. In 2010, this Google Doodle famously resulted in approximately 4.8 million hours of play around the globe.

“PAC-MAN was truly the first breakout superstar of our industry and his enduring staying power says a lot about the experiences he’s given to fans and the love they’ve given him in return.” said Ross Borden, Vice President of Marketing at BANDAI NAMCO Entertainment America Inc. “While 2020 has been a trying year for everyone, we hope our fans embody PAC-MAN’s drive to always move forward, to never back down from adversity, and come out of any challenge on top!”

To learn more about BANDAI NAMCO Entertainment America Inc.’s other products go to: http://www.bandainamcoent.com/home.html or follow us on Facebook at https://www.facebook.com/BandaiNamcoUS or join the conversation on Twitter at http://www.twitter.com/bandainamcous.

PAC-MAN video games are available now across all popular gaming platforms including the PlayStation®4, Xbox One, PCs via STEAM®, Nintendo Switch, as well as iOS devices via the App Store and Android devices via Google Play. Official PAC-MAN apparel and special collectibles are also available on the BANDAI NAMCO Entertainment America store.

A new video celebrating PAC-MAN’s 40th Birthday can be found on YouTube at: https://youtu.be/5FP3oKPhoaM

Assets for PAC-MAN’s 40th Anniversary can be found at the BANDAI NAMCO Entertainment America Inc. press room site at: http://www.bneapressroom.com

BANDAI NAMCO Entertainment America Inc., part of BANDAI NAMCO Holdings Inc., is a leading global publisher and developer of interactive entertainment for all major video game consoles, iOS, Android, and online platforms. The company is known for creating and publishing many of the industry’s top video game franchises including PAC-MAN®, GALAGA®, TEKKEN®, SOULCALIBUR®, and ACE COMBAT®. BANDAI NAMCO Entertainment America Inc. is the premier publisher in the Western hemisphere for anime based video games including NARUTO SHIPPUDEN™, DRAGON BALL Z®, and ONE PIECE®. More information about the company and its products can be found at http://www.bandainamcoent.com or www.facebook.com/BandaiNamcoUS.

About the Giant Race Series:

The Giant Race Run/Walk Series presented by Alaska Airlines represents the perfect combination of running, baseball, and now PAC-MAN! With annual events held in Scottsdale, Sacramento, San Jose and San Francisco, the Giant Race unites an array of San Francisco Giants-inspired themes at every level of professional baseball. After stops in Scottsdale during Spring Training and at Minor League facilities in Sacramento and San Jose, the Series ends on the field at Oracle Park with a 20,000-participant race on the flattest and fastest course in San Francisco. The San Francisco Giants and Giants Enterprises have worked together to give baseball fans and running enthusiasts an unforgettable journey of run, walk, fitness, and training experiences all season long. For more information, visit www.giantrace.com.

All other trademarks are properties of their respective owners.

The Sims 4 Eco Lifestyle Launches Today on PC, Mac, and...