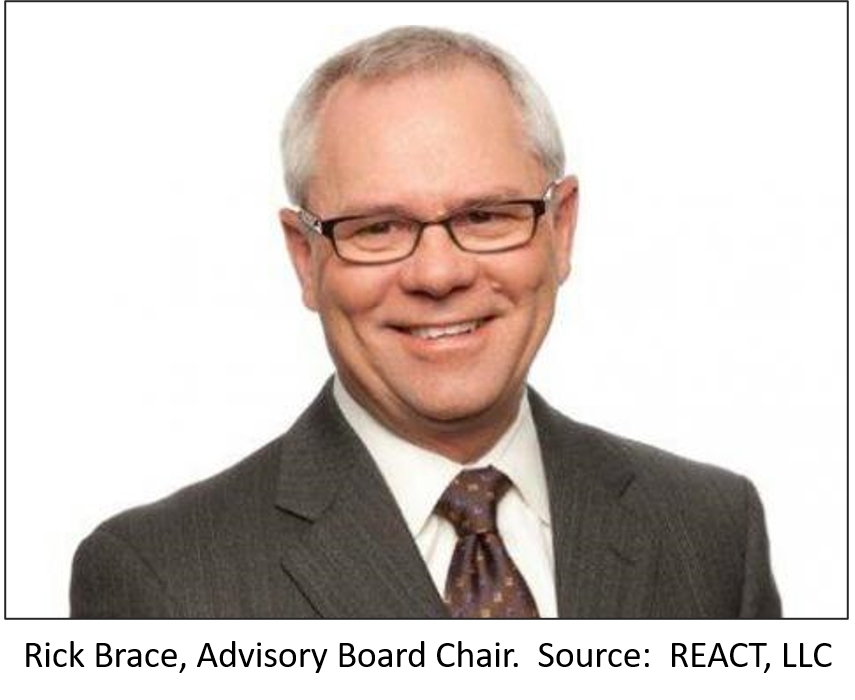 TAMPA, Fla.–(BUSINESS WIRE)–#biggergame–For a third time in as many weeks, Tampa Bay-based React LLC (“React”) has added industry leading talent to its core executive and advisory teams. The Company announced today that Rick Brace has officially been named as Chairman of its 2020-2021 Advisory Board. Brace will also assist an exploratory committee developing an entirely new sports entertainment genre.

Mr. Brace joins the React Board after having recently retired as President of Rogers Media in late 2019. He started his career as a technician at CBC (Canada’s public broadcaster), where he advanced through production roles as a director, producer and executive producer with CBC Sports. In 1984 Brace joined the fledgling cable channel TSN (Canada’s version of ESPN), moving into management and becoming the head of programming and production and then president of the network, which included TSN and its French sister station RDS. In 2001, when TSN and RDS were purchased by Canada’s largest broadcast and cable channel operator, CTV, Rick moved with the purchase to become president of Cable Channels and later president of the entire company. In 2015 Brace joined Rogers Media as president, overseeing its asset mix of broadcast television, 56 radio stations and 50 print publications.

The formation of its inaugural Advisory Board, with Brace as its Chairman, coincides with privately held React concluding its second round of outside financing, and then launching the Super Squares® app and live mobile game show by this fall. The free-to-play “score matching mobile game show” syncs to real time sports broadcasts, where pre-registered fans in North America will win cash and prizes ranging from gift cards to new cars. The company and app have attracted national buzz since the COVID-19 pandemic, due to the unique ability of Super Squares® to enable leagues and networks to entice millions of fans to watch live OR repeat broadcasts of football, hockey and basketball games. Attention to, and gamification of, real time sports and advertising forms the basis of the Super Squares® second screen platform.

By comparison, most popular daily fantasy and network-owned predictor apps are currently sidelined, completely reliant on live sports for audiences, requiring prediction and wagering as the basis of engagement.

Brace confirms the Company’s innovative solutions will attract like-minded media network and professional sports leagues, remarking that “…in this rapidly changing media environment, where competition for audiences and advertising has never been so fierce, the team at React is poised to deliver a compelling and novel approach to immerse fans of all types of sports. The solution takes advantage of emerging platforms and new ways of watching sports. I am honored to serve as an advisor to this innovative team.”

In addition to his Advisory Board role, Rick Brace will join React’s “Project Splice™” exploratory committee, along with recently announced Commissioner of Sports Matt Birk, and Chief Content Officer Tim Sabean. The group is inviting select sports leagues and media networks to review early program blueprints and will invite collaboration with the Company’s patent-pending new reality sports entertainment genre. Last week, Commissioner Matt Birk hinted that the secretive project “…will do for sports culture and real-time viewing, what hits like Survivor and American Idol did for prime-time TV twenty years ago.”

Brace’s Project Splice™ involvement evolved naturally. “It’s really exciting to have Rick Brace on the team; the synergies are electric. In fact, as we began finalizing Rick’s Advisory Board role, it occurred to us both that pandemics aren’t the only events that cause stoppages in play,” says React Founder and CEO Frank Maggio. “In fact, every league has an off-season that sees them lose significant fan interest, often for many months, when each league’s live games come to an end. While Super Squares® will be able to create excitement around real time viewing of live and replay games, now and in off-season, the Splice™ initiative creates a very exciting form of real time sports entertainment that’s never been seen before.”

Maggio has set a May 15th target date for release of details around Project Splice™ and confirms that U.S. and International patents and trademark applications are already in place. Reveals Maggio, “Think of Project Splice™ as the ‘Legend of Leagues,’ borrowing from eSports to some degree, but built entirely on classic epic rivalries between teams and players across all pro sports. Mix in a combination of Super Squares® second screen fan involvement and a reality TV vibe, and we should appeal to millions of fans of all ages and interest levels, across the globe.”

Founded by adtech and media measurement maverick Frank Maggio, React LLC is an experiential advertising technology and entertainment company that thinks of “advertising as a sport™.” By adrenalizing advertising™, React excites audiences with rewarding, branded two-screen experiences during the most viewed and attended sporting and media events in the world. The company’s commitment to “respect, protect, and reward attention” honors user privacy by never selling or sharing personally identifiable information. Details about React can be found at www.react.net, and Super Squares® details are available at www.SuperSquares.com.