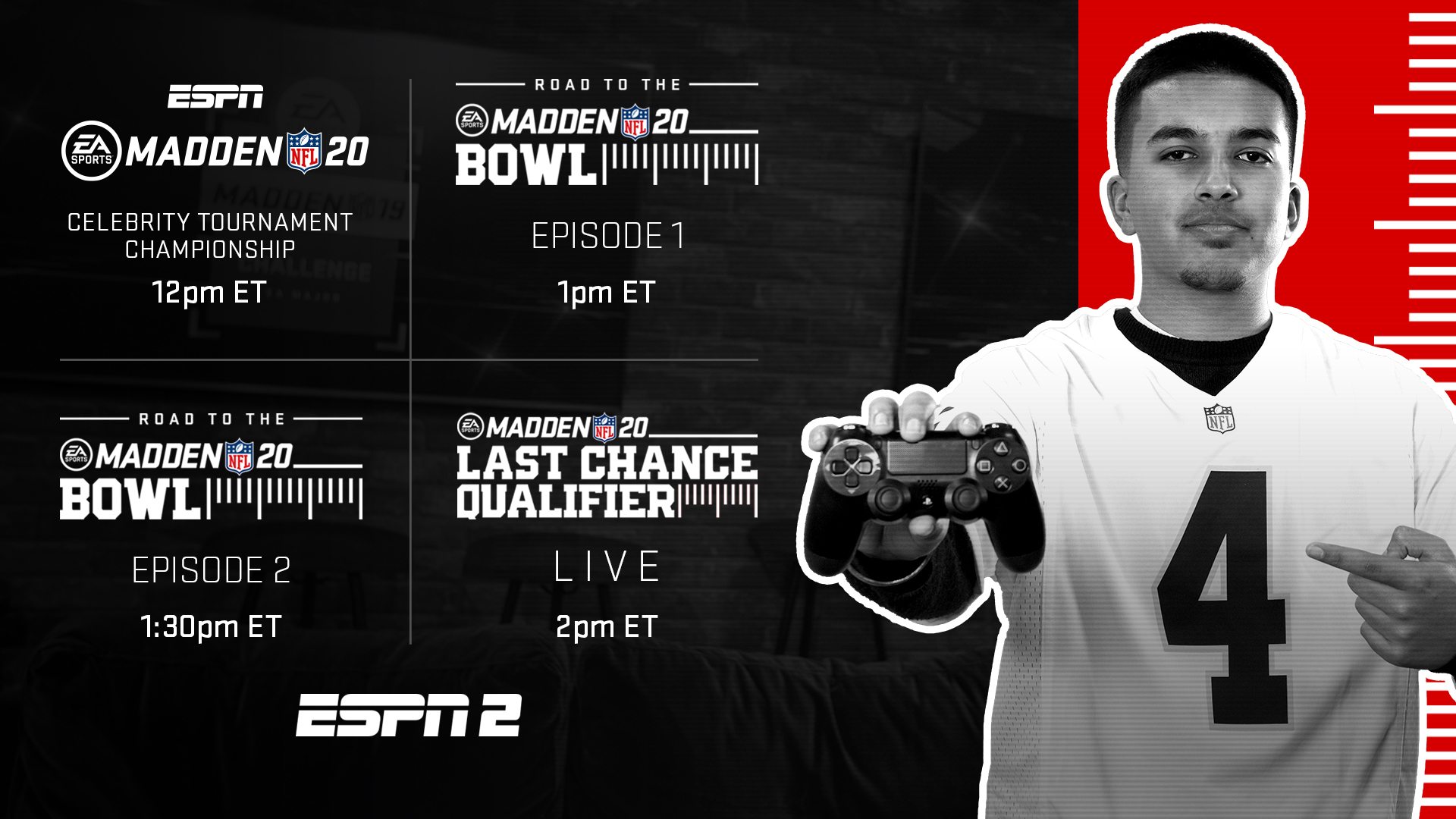 REDWOOD CITY, Calif.–(BUSINESS WIRE)–Today, Electronic Arts Inc. (NASDAQ:EA) and ESPN announced new Madden NFL 20 Championship Series (MCS) programming set to deliver more competitive action and entertainment straight to the homes of sports fans and gamers following the excitement of the live 2020 NFL Draft. To kick off the programming, ESPN2 will air the first two episodes of the “ROAD TO THE MADDEN BOWL,” bookended by the final match of the ESPN Madden NFL 20 Celebrity Tournament and the live Madden NFL 20 Last Chance Qualifier – bringing ESPN2’s Madden NFL airtime to a total of five consecutive hours this Sunday, April 26. All programming will be available for replay immediately after the ESPN2 airing within the ESPN App.

“At a time where live sports are paused, esports has stepped up as an incredible source of entertainment, inspiration and joy for fans across the world,” said Todd Sitrin, SVP and GM of the EA Competitive Gaming Division. “Through this exciting programming with ESPN, we can invite the broader sports community to be a part of the unique and authentic Madden esports competition, keeping gamers and traditional sports fans alike connected, while staying safe at home.”

Bringing new competitive action to fans is a part of EA’s “Stay Home. Play Together.” initiatives, which help the global community find more ways to connect through play, during a time where we need to be physically apart. The telecasts are also part of ESPN’s commitment to bringing the sports community together during this unprecedented time through its #oneteam initiative.

The ESPN Madden NFL 20 Celebrity Tournament features celebrities, athletes and musicians competing in Madden NFL 20 for bragging rights and a donation made in the winner’s name to Feeding America to assist with COVID-19 relief. Celebrity matches are already underway and can be watched on ESPN digital and social platforms each day this week at 12 p.m. ET.

The Madden NFL 20 Bowl, which closes out the Madden Championship Season, features the top 16 Madden NFL players in the world competing from home, #StayHomePlayTogether, for a $220,000 prize pool. Qualified competitors include Madden NFL Club Champions from the Cardinals, Packers, Jaguars, Eagles, Texans, Colts, Falcons and Browns along with this year’s belt winners, Serious Moe and Noah. Two additional competitors will advance from this weekend’s Last Chance Qualifier to round out the competitor field.

To stay up-to-date on all things Madden NFL 20 Championship Series follow the @MaddenLeagueOps on Twitter and for more information visit the Madden NFL 20 Championship Series home page. To learn more about EA’s “Stay Home. Play Together.” initiatives, you can check out https://www.ea.com/en-ca/stay-and-play for upcoming activities and livestreams.

EA SPORTS, Battlefield, Apex Legends, The Sims, Need for Speed, Titanfall and Plants vs. Zombies are trademarks of Electronic Arts Inc. FIFA is property of its respective owners and used with permission.

About Esports at ESPN

ESPN has a long history of delivering live programming, coverage and content to esports fans. It televised and streamed the Overwatch League playoffs and Grand Finals alongside Disney XD in addition to televising the EA SPORTS Madden NFL 18 Championship Series with Disney XD. In 2019, ESPN Events hosted the first-ever Collegiate Esports Championship at Comicpalooza in Houston and also put on two owned and operated events featuring EA’s Apex Legends in conjunction with The ESPYS and X Games Minneapolis 2019. The network also delivered the Street Fighter V World Championship and Super Smash Bros. for Wii U from Evo 2017, as well as hosted the X Games Rocket League Invitational from X Games Minneapolis 2017, and the FIFA Ultimate Team Championship Series across ESPN, ESPN Deportes and ESPN3. In 2016, ESPN2 aired the Capcom Cup 2016 Street Fighter V Final in December, the Street Fighter V World Championship in July, and the Madden NFL 16 Championship from EA Play in June. In addition, ESPN X Games teamed up with Xbox to bring Halo 5: Guardians to X Games Aspen 2016, as part of the Halo World Championship Tour.

Since 2016, ESPN.com has also delivered year-round coverage through a dedicated esports vertical featuring some of the most voices in esports. Previously, ESPN3 carried live coverage of BlizzCon and The International Dota 2 Championships in 2014 and 2015, as well as the 2014 League of Legends tournament. The network also previously delivered exclusive live coverage of Heroes of the Dorm in 2015 and 2016, with the final airing live on ESPN2, and the 2015 tournament being the first ever live, televised coverage of a collegiate esports event for ESPN.

BusinessWire - 24 Settembre 2020
DUBLIN--(BUSINESS WIRE)--The "China's Console & TV-Based Games Market" report has been added to ResearchAndMarkets.com's offering.Since the overturn of the console ban in 2014, a...

Riot Games Chooses to Build Next Games in League of Legends...