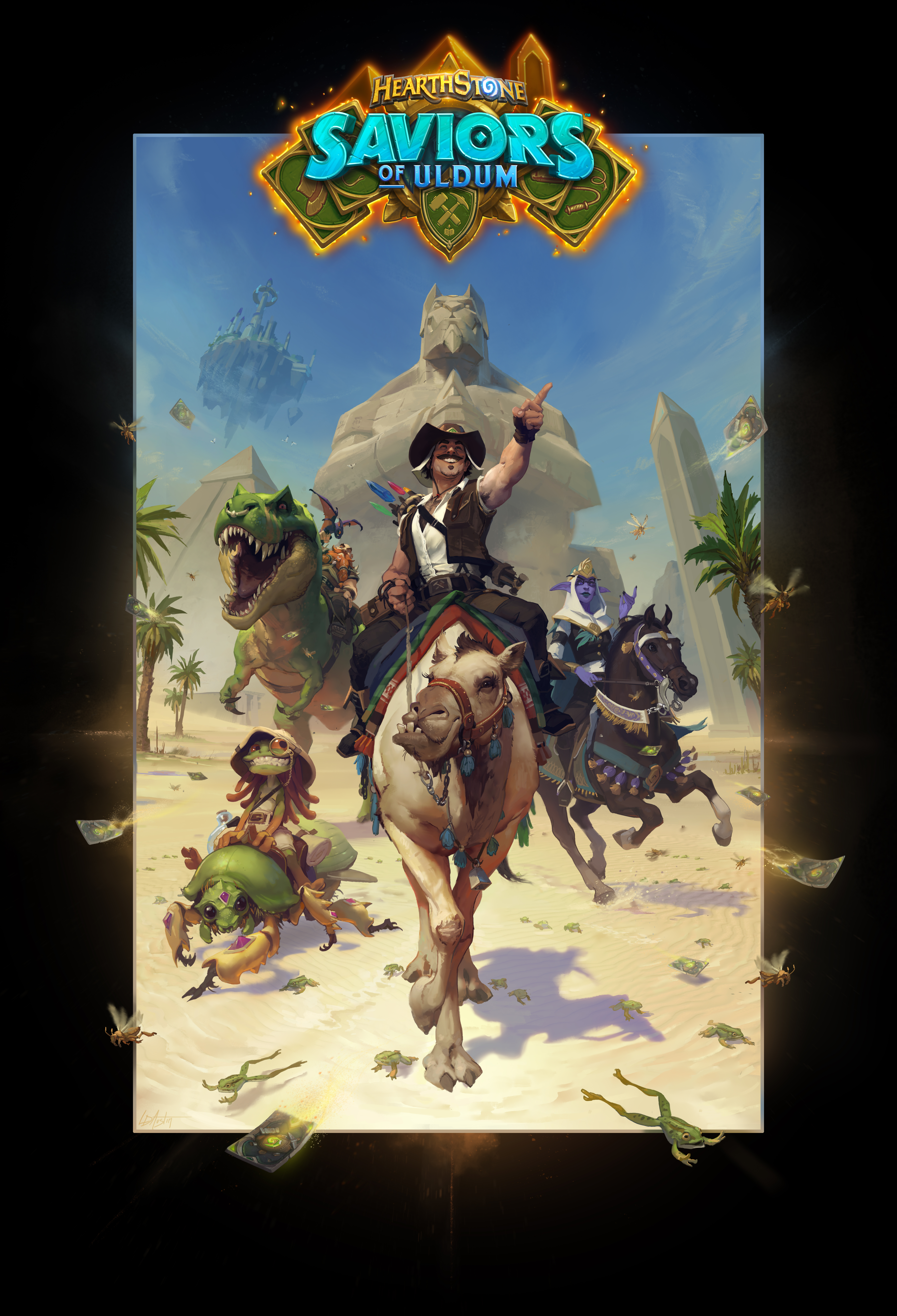 Log in today to claim your FREE Legendary Quest card*

Saviors of Uldum marks the thrilling return of the League of Explorers—Elise Starseeker, Brann Bronzebeard, Sir Finley Mrrglton, and Reno Jackson—four of the game’s most popular characters, who have leveled up in legendary fashion. This quartet of questing archaeologists now each feature a powerful Battlecry effect that triggers if there are no duplicate cards in the player’s deck.

In addition, Saviors of Uldum unleashes potent Plague cards in Hearthstone, such as the Plague of Murlocs, which transforms every minion on the board into one of the game’s adorably aggressive amphibians. Players will also encounter a new keyword, Reborn—describing doggedly persistent minions that, thanks to a state-of-the-ancient-art embalming process, return to life with just 1 Health remaining upon being defeated. All nine hero classes can even embark on new Quests that, upon completion, will grant them an alternate Hero Power.

“Saviors of Uldum reflects all of the personality and fun of Hearthstone while opening a wide range of strategic possibilities in the game,” said J. Allen Brack, president of Blizzard Entertainment. “We’re excited to have the League of Explorers back in action and can’t wait to see all the creativity players bring to their decks with this new expansion.”

Hearthstone players have enjoyed regular content updates featuring new and exciting ways to play all year long, from the first expansion, Rise of Shadows™, and its infinitely replayable Dalaran Heist single-player Adventure to multiple free in-game events awarding card packs and in-game gold. Next month, players will be able to explore the Tombs of Terror, the corresponding single-player Adventure for Saviors of Uldum, which will offer an all-new highly replayable experience—with some menacing new twists thrown in for good measure. Further details on Tombs of Terror will be announced shortly.

Saviors of Uldum card packs are currently winnable in Hearthstone’s Arena mode, and players can purchase them with in-game gold or real money at the same prices as Hearthstone’s other card packs. In addition, players who log in now and for a limited time after release will be able to claim one of the new Legendary Quest cards, randomly selected from this set.*

Dig up more information on the latest Hearthstone expansion at www.saviorsofuldum.com.

With more than 100 million players worldwide, Hearthstone is Blizzard Entertainment’s internationally acclaimed, free-to-play digital card game designed for novice and veteran card-slingers alike. Players can choose from nine powerful hero classes and customize their decks with minions, spells, and weapons based on the unique fantasy of the Warcraft® universe. Featuring a variety of game modes ranging from epic head-to-head duels to story-driven Solo Adventures, Hearthstone offers a vibrant and rewarding experience stacked with strategy, personality, and fun. Hearthstone is available globally for Windows and Mac PCs; Windows, iOS, and Android tablets; and mobile phones.

Best known for blockbuster hits including World of Warcraft®, Hearthstone, Overwatch®, the Warcraft, StarCraft®, and Diablo® franchises, and the multifranchise Heroes of the Storm®, Blizzard Entertainment, Inc. (www.blizzard.com), a division of Activision Blizzard (NASDAQ: ATVI), is a premier developer and publisher of entertainment software renowned for creating some of the industry’s most critically acclaimed games. Blizzard Entertainment’s track record includes twenty-two #1 games† and numerous Game of the Year awards. The company’s online gaming service, Battle.net®, is one of the largest online-gaming services in the world, with millions of active players.

* Limit one per account. Must log in by October 30, 2019 to redeem offer.
†Sales and/or downloads, based on internal company records and reports from key distributors.

Intel World Open: Path to Tokyo Kicks Off in March