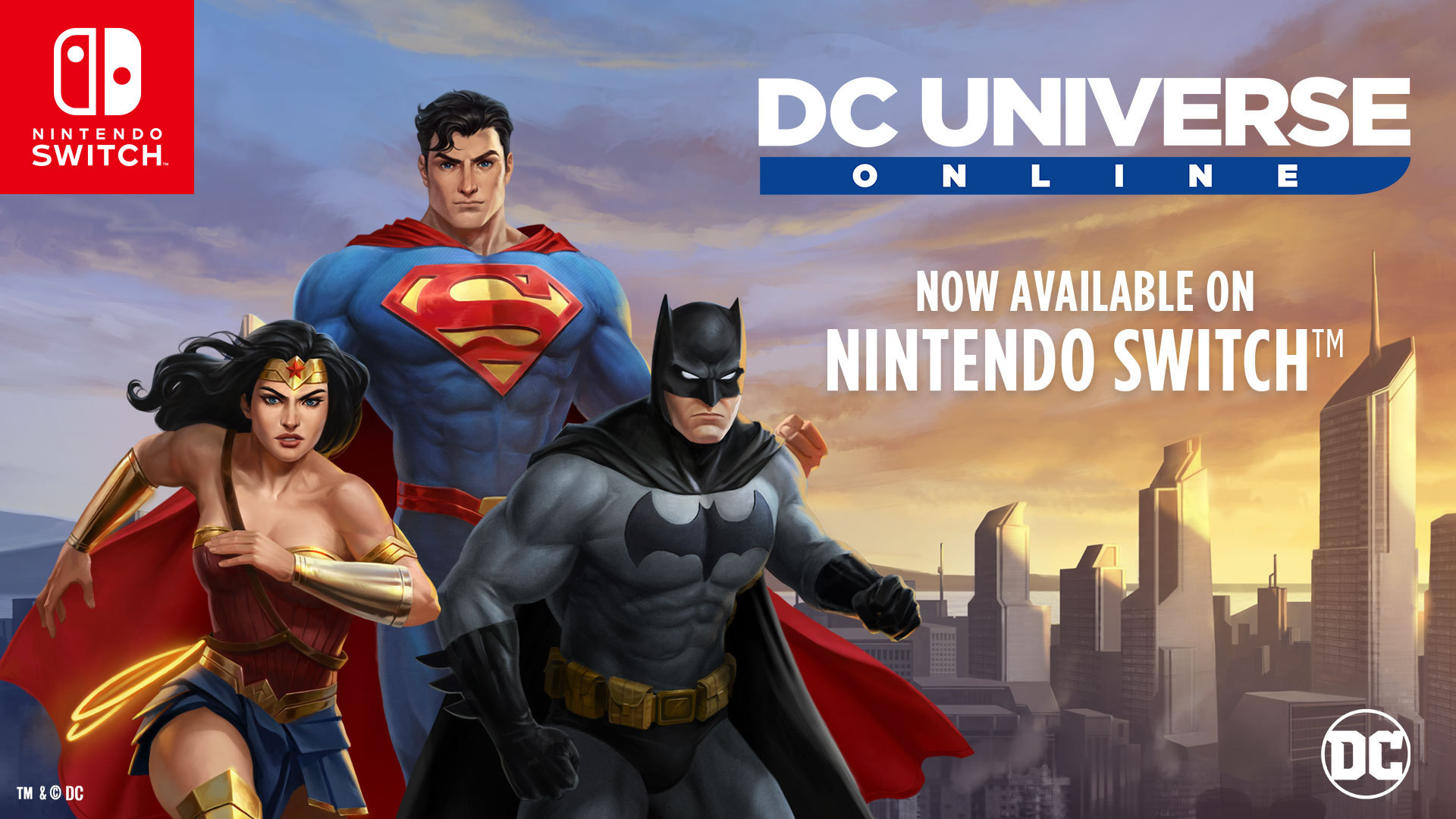 “DC Universe Online is the ultimate Super Hero fantasy,” said SJ Mueller, Creative Director of DC Universe Online. “Who hasn’t imagined what their own Super Hero would look like or what superpowers they’d have? Then hit the streets of Gotham City and Metropolis and partner with the greats like Batman, Superman, Wonder Woman, or even The Joker. In DCUO, it’s YOUR character, with the DC Universe as your playground to either protect or conquer!”

DC Universe Online allows players to channel their inner Super Hero or Super-Villain by creating a unique, customizable character from a wide selection of superpowers, movement modes, weapons and over 2000 styles. Players fight alongside DC’s iconic characters, including Batman, Wonder Woman, Superman and The Joker, in immersive, physics-based action combat.

The DCUO team focused on many quality-of-life improvements over the past year to ensure players have the best MMO experience on Nintendo Switch. These include a revamped tutorial, access to the latest event content within a few hours of starting the game, new augment and artifact systems, and updated character models. DCUO will launch on Nintendo Switch with a brand-new server, separate from all other communities.

Lex Luthor has traveled back through time with news of a dire future: While the heroes and villains spent years battling amongst themselves, Brainiac has been feeding on their powers, building strength to return to Earth and destroy humanity. To change the future, Lex has come back to set off a device that bestows superpowers to thousands of everyday citizens and give humanity a fighting chance. Can Brainiac be stopped, or is this another nefarious Lex Luthor plot?

Players and fans will be able to enter the DC Universe as an active force for good or evil. A massively multiplayer experience DC Universe Online delivers unparalleled high-energy, physics-powered combat that brings the player’s extraordinary powers to life.

DC Universe Online was created in the artistic vision of legendary comic book artist Jim Lee and set within a world created by famous DC writers including Geoff Johns and Marv Wolfman.

DC Universe Online is now available and free-to-play on Nintendo Switch™, PlayStation®4, Xbox™ One, and Windows PC. DCUO offers optional Membership for the best experience, including access to all episode content, powersets, and more for a $14.99 monthly fee.

Daybreak Games is a worldwide leader in massively multiplayer online games and emergent gameplay best known for its blockbuster hits and franchises, including the original standalone battle royale game, H1Z1®, EverQuest®, EverQuest®II, PlanetSide®2 and DC Universe™ Online. Daybreak also publishes The Lord of the Rings Online™ and Dungeons & Dragons Online® for Standing Stone Games. The forward-thinking publisher, developer and creator of compelling online entertainment for a variety of gaming platforms is headquartered in San Diego, and has development studios in Austin, TX; Boston, MA; and South Korea. To learn more, visit: www.DaybreakGames.com.

Warner Bros. Interactive Entertainment, a division of Warner Bros. Home Entertainment Inc., is a premier worldwide publisher, developer, licensor and distributor of entertainment content for the interactive space across all platforms, including console, handheld, mobile and PC-based gaming for both internal and third-party game titles.

Home to iconic and globally recognized Super Heroes Batman, Superman and Wonder Woman, DC is one of the largest English-language publishers of comics in the world and a creative unit of WarnerMedia, publishing thousands of comic books, graphic novels and magazines each year. Founded in 1934 with the launch of Detective Comics, DC is charged with strategically integrating its stories and characters across Warner Bros. and WarnerMedia properties.