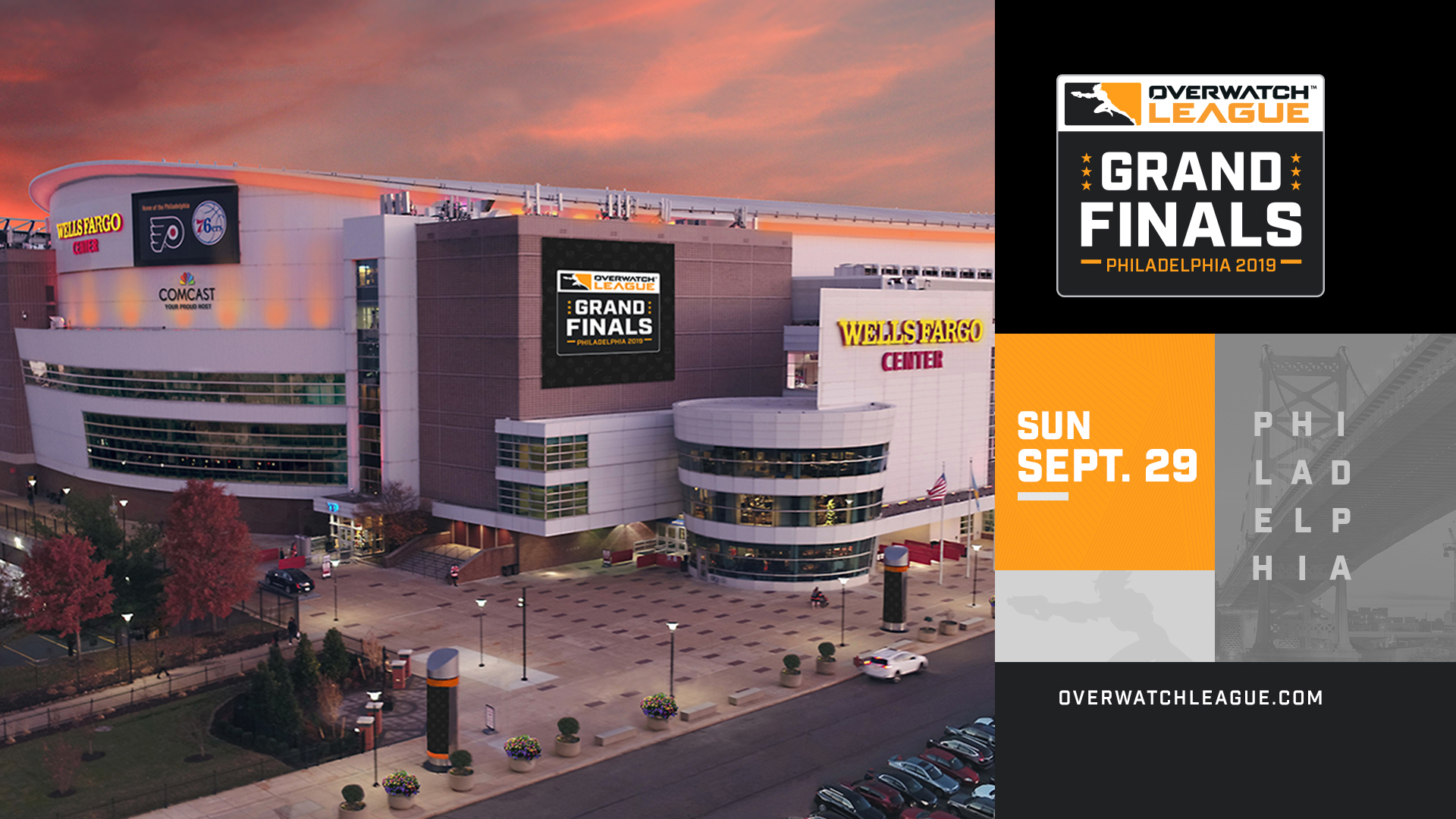 Tickets will be available for sale to the public on Friday, June 7th via the Wells Fargo Center

IRVINE, Calif.–(BUSINESS WIRE)–lt;a href="https://twitter.com/hashtag/OWL2019?src=hash" target="_blank"gt;#OWL2019lt;/agt;–The Overwatch League™ today announced the date, venue, and ticketing availability for the 2019 Overwatch League Grand Finals. The Grand Finals, which will determine the league champion, will be held at the Wells Fargo Center in Philadelphia, Pennsylvania, on Sunday, September 29th. The two teams that qualify for the Grand Finals will compete for the League’s championship trophy and a share of the US $1.7 million prize pool—with the winning team getting $1.1M and the runner-up taking home $600K.

“Philadelphia is a legendary sports town with amazing fans and the Wells Fargo Center is the perfect venue to crown our next champion,” said Nate Nanzer, Overwatch League Commissioner. “The 2018 Grand Finals in Brooklyn was epic but we’re looking to up the ante for our season finale in Philly. We have 20 teams in the League now, so the path to the championship is going to be extremely competitive and very entertaining.”

The 2019 Grand Finals will be livestreamed on Twitch in 190 countries, and broadcast in the U.S. on ABC from 3:00 – 6:00 p.m. EDT on September 29. It will also be available on the ESPN app, overwatchleague.com, and the Overwatch League app. Additionally, the Grand Finals will air in the following countries via additional platforms: Canada (TSN), China (Zhanqi, NetEase CC, Bilibili and Huya) France (Mediawan), Germany (Sport1), and Russia (E Terra TV).

The Wells Fargo Center, one of the busiest arenas in the world hosting more than 250 events each year, is home to the NHL’s Philadelphia Flyers, NBA’s Philadelphia 76ers, NLL’s Philadelphia Wings, and the Arena Football League’s Philadelphia Soul. With more than 2.6 million fans walking through its doors each year, the Wells Fargo Center has hosted a long list of nationally-recognized events, including the Republican National Convention (2000), NBA All-Star Weekend (2002), ESPN X Games (2001 and 2002), Stanley Cup Finals (1997 and 2010), NHL Entry Draft (2014), NCAA Men’s Frozen Four (2014), and the Democratic National Convention (2016).

“Last year we witnessed thousands of passionate Overwatch® fans at the Grand Finals and we can’t wait to bring this electric event to Philadelphia’s Wells Fargo Center,” said Dave Scott, Chairman and CEO, Comcast Spectacor. “Overwatch League fans will be some of the first guests to enjoy the arena’s new advancements and we look forward to hosting an international audience for premier programming. We are thrilled to bring world-class gaming to Philadelphia’s expanding technology, esports, and entertainment scene.”

The arena is currently in the midst of a multi-year, $250-million renovation initiative—Transformation 2020—which is aimed at reinventing every aspect of the fan experience within the venue. The Overwatch League Grand Finals will be the first major event hosted at the facility following a summer of major upgrades and advancements, including an overhaul of the main concourse, brand-new lower bowl seating, and the installation of the world’s first kinetic 4K center-hung entertainment system.

The Grand Finals represents the culmination of the 2019 Overwatch League season playoffs, which will feature 12 of the League’s 20 teams. For the postseason, the two division winners along with the next best four teams by record, regardless of division, will automatically qualify. Two additional teams will qualify through a play-in tournament between the seventh- through 12th-place teams. Those eight teams will compete in a double-elimination bracket. The final two teams that advance out of the bracket will compete in the Grand Finals.

About the Overwatch League™

The Overwatch League™ is the first major global professional esports league with city-based teams across Asia, Europe, and North America. Overwatch® was created by globally acclaimed publisher Blizzard Entertainment (a division of Activision Blizzard—NASDAQ: ATVI), whose iconic franchises have helped lay the foundations and push the boundaries of professional esports over the last 15 years. The latest addition to Blizzard’s stable of twenty-two #1 games,[1] Overwatch was built from the ground up for online competition, with memorable characters and fast-paced action designed for the most engaging gameplay and spectator experiences. To learn more about the Overwatch League, visit www.overwatchleague.com.

Best known for blockbuster hits including World of Warcraft®, Hearthstone®, Overwatch®, the Warcraft®, StarCraft®, and Diablo® franchises, and the multi-franchise Heroes of the Storm®, Blizzard Entertainment, Inc. (https://www.blizzard.com), a division of Activision Blizzard (NASDAQ: ATVI), is a premier developer and publisher of entertainment software renowned for creating some of the industry’s most critically acclaimed games. Blizzard Entertainment’s track record includes twenty-two #1 games[1] and multiple Game of the Year awards. The company’s online gaming service, Blizzard Battle.net®, is one of the largest online-gaming services in the world, with millions of active players.

Activision Blizzard Esports Leagues (ABEL) is responsible for the development and operation of premier Activision Blizzard professional gaming properties including the Overwatch League™ and the Call of Duty® World League, as well as the commercialization of the entire Blizzard Esports portfolio. Launched in 2017, the Overwatch League is the world’s first major global esports league with city-based teams, with 20 teams across Asia, Europe, and North America. In 2019, the Call of Duty World League Presented by PlayStation®4 will deliver five vs. five team play featuring Call of Duty®: Black Ops 4. It is ABEL’s vision to be the most innovative, scalable, and valuable developer of global competitive entertainment.

[1] Sales and/or downloads, based on internal company records and reports from key distribution partners.